In this post I will deconstruct STIX Patterns and demonstrate how to write effective detection rules (aka patterns).

In this post I will deconstruct STIX Patterns and demonstrate how to write effective detection rules (aka patterns).

The ultimate use of intelligence is to try and defend or counteract for it. For example, understanding how to put in place network defenses or to mitigate an attack that has been successful in part of its initiatives.

Part of this is to ensure you are able to detect security events (to ensure the bit of intelligence you are looking at has not already impacted you).

Many of you will be familiar with detection languages in SIEMs to search for malicious events. There might be as simple as searching for an IP address, or more complex looking for behaviours and patterns alongside evidential breadcrumbs.

In STIX 2.1, Indicator SDOs must contain a pattern Property that can be used to describe suspicious or malicious cyber activity.

The STIX 2.1 Indicator SDO specification is flexible enough to allow for a range of detection language (pattern_type) as defined in the Pattern Type Vocabulary, these are;

For example, I could use a YARA pattern inside an Indicator SDO by defining the Properties "pattern_type": "yara" and define the actual YARA rule under the "pattern" Property.

Note, the YARA rule (or any non-STIX pattern type) should be encoded into JSON. You can see this in the raw json in the bundle below;

You will have seen the STIX specific pattern_type listed above. This is a pattern language defined by OASIS in the STIX 2.1 specification.

Before continuing, it is worth making the distinction between Indicator SDOs and Indicators of Compromise (IOCs) – they are often confused.

IOCs are atomic indicators. These are elements or fragments of data that cannot be broken down any further like a hostname, IP address, email address, file name, etc.

Indicator SDOs can contain zero or more IOCs and the logical relationship between them as patterns.

In the case of sigma pattern_types, for example, the detection might be purely behavioural and not contain any IOCs.

Whereas stix pattern_types are composed of IOCs (aka SCOs), ranging from simple key-value comparisons to more complex, context-sensitive expressions.

Here is the general structure of a STIX Pattern; 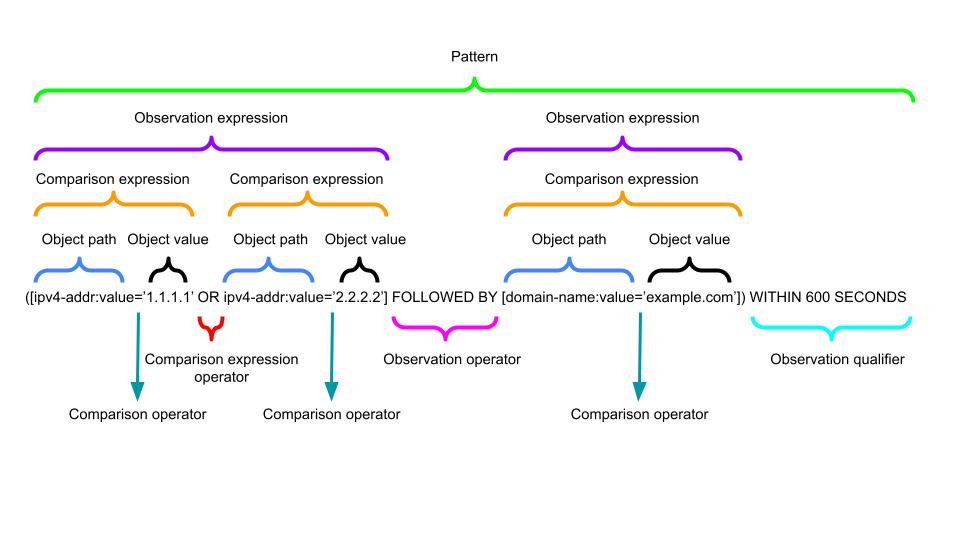 It is a lot! Let me try and take this structure apart for you.

Comparison Expressions are the fundamental building blocks of STIX patterns.

They take an Object Path (using SCOs) and Object Value with a Comparison Operator to evaluate their relationship. 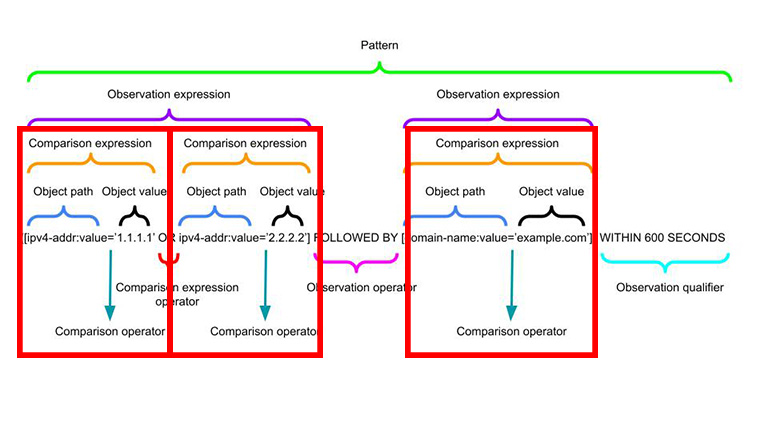 My earlier example of a filename showed a simple Comparison Expression in a Pattern.

Here is an example of a simple Comparison Expression to detect an IPv4 address:

It uses the IPv4 Address SCO (ipv4-addr) and its ID Contributing Property (value) as the Object path (shown in specification screenshot below). The Object value is 198.51.100.1. 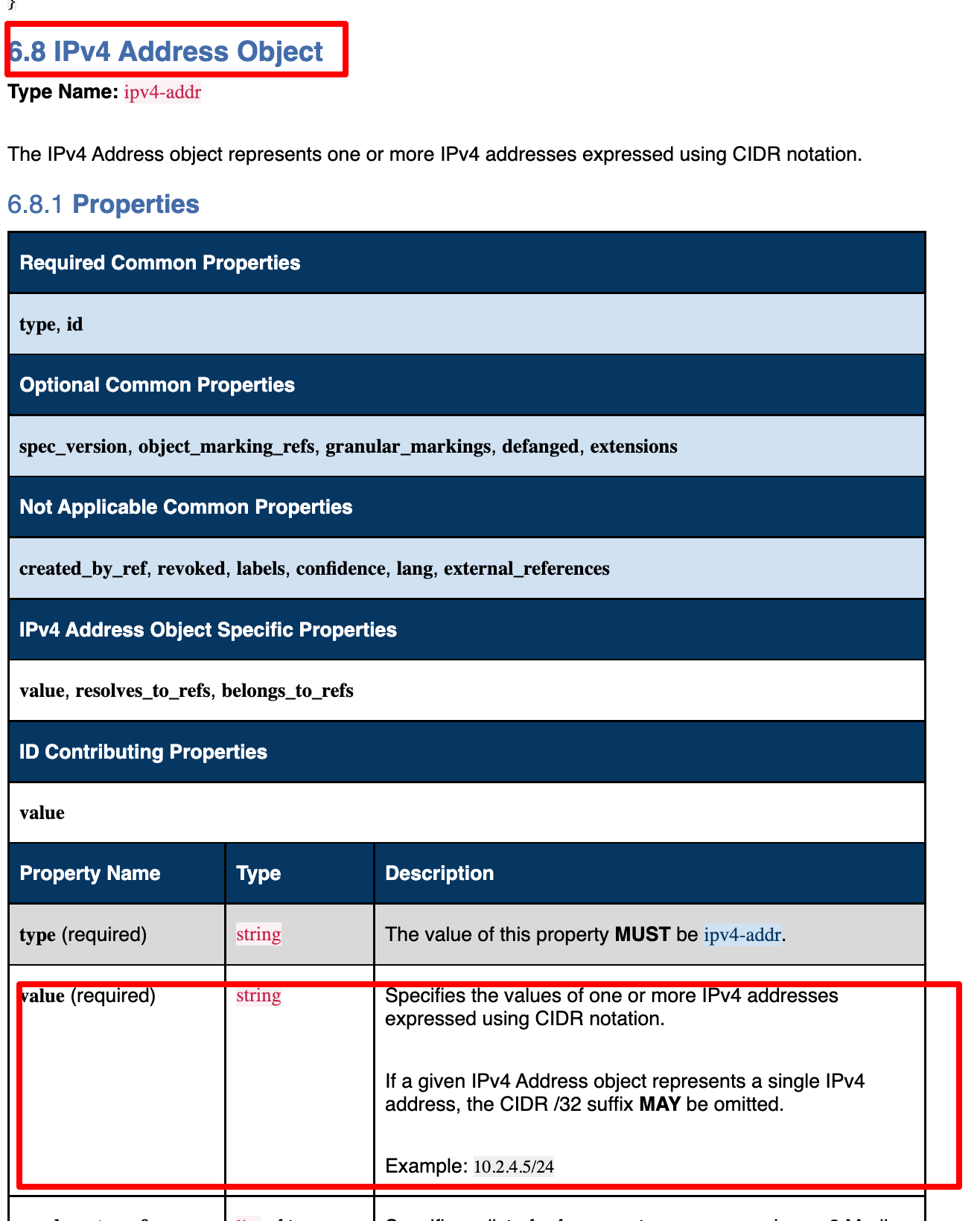 Here I use Windows Registry Key Object Key SCO and its ID Contributing Property (key) (shown in specification screenshot below). The Object value is HKEY_LOCAL_MACHINE\\System\\Foo\\Bar. 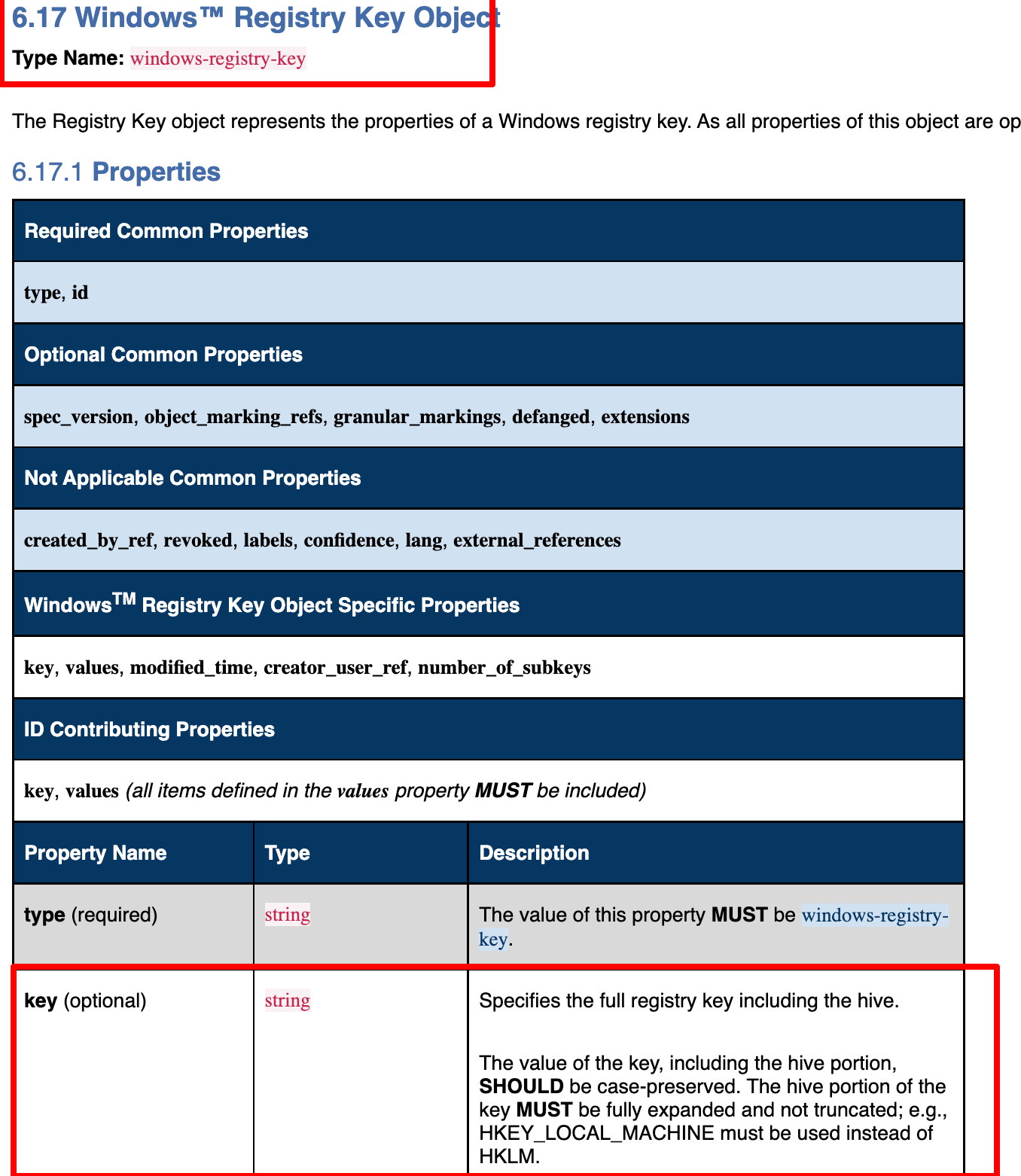 In the above example I am using the LIKE Comparison Operator. You will notice it is possible to pass capture groups. In the example above % catches 0 or more characters.

As such a pattern would match (be true) if C:\Windows\DAVID\foo, C:\Windows\JAMES\foo, etc. was observed. 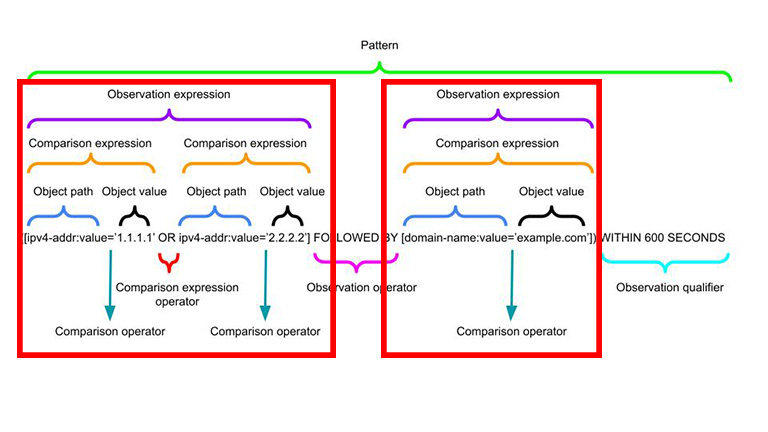 The entire Observation Expression is captured in square brackets [].

In the following example there are two Observation Expressions joined by the Observation Operator FOLLOWEDBY;

Observation Expression Qualifiers allow for even more definition at the end of a pattern.

You can define WITHIN, START/ STOP, and REPEATS Observation Expression Qualifiers.

The following example requires the two Observation Expressions to repeat 5 times in order for a match;

Here is another example that is very similar to a pattern used for malware detection;

Operator Precedence is an important consideration to keep in mind when writing Patterns.

Now consider the following Pattern (almost identical to before, but notice the parentheses):

Some examples to test you

Below are samples from a Linux audit log (/var/log/audit/audit.log) – it is better viewed by copying it into a text editor for this exercise.

Assume the SIEM has aliased field names correctly (e.g. addr field in the logs resolves to an IPv4 address field in the data model, which in turn is mapped to the ipv4-addr SCO).

Example 1: Using the OR Observation Expression

Example 2: Using the AND Observation Expression

Now you have seen how Patterns can be used, detections (aka sightings) need to modelled. If you start to use STIX Patterns for threat detection, you will probably want to represent the detection matches in STIX format too.

That is where the STIX Sighting SRO and Observed Data SDO can help, as detailed in the previous post.

In the example below I am using sighting SRO to show a Pattern inside the Indicator SRO (indicating Malware) [ipv4-addr:value='198.51.100.3' AND domain:value='example.com'] was matched 50 times.

The Observed Data SDO captures that information too, but also points to the specific things (SCOs) that were seen (the bits of the Pattern that matched). In this case it is a domain-name (example.com) and ipv4-addr (198.51.100.3);

The STIX 2 Pattern Validator from OASIS is a great tool in checking your patterns are written correctly.

Simply run the STIX 2 Pattern Validator script by declaring your Pattern. If the Pattern is valid it will return something similar to the following;

If you are trying to see if content in an Observed Data SDO matches an existing STIX Pattern you can use the CTI Pattern Matcher.

Whilst the STIX standard is very broad when it comes to threat intelligence concepts, there are always edge cases.

In such cases, STIX Objects, Properties and Extensions can all be customised to suit your requirements.

I will cover the topic of customisation of STIX 2.1 in the next post.

Getting Started with STIX Shifter 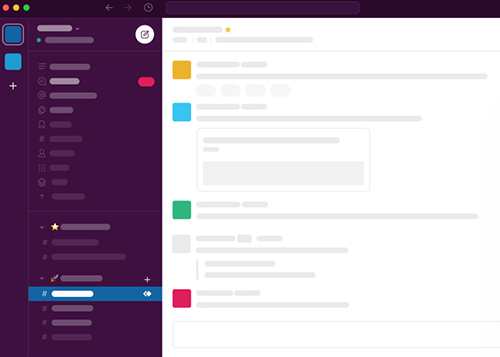 
Sign up to receive new articles in your inbox as they published.